One of New Zealand's greatest potters, Barry Brickell, paid a visit to Dunedin this week, so I went along to check out his live throwing exhibition at the Art Gallery, where he threw one of his famous 'fatso' jugs.

The exhibition of his work:  'His Own Steam' is an amazing collection of 100 pieces showcasing a lifetime of exploration and experimentation, and I would totally recommend going to see it. Barry Brickell specialises in wood firing and the use of natural glazes, two things that are really important to me in my own work, and not only that -  he is totally self-sufficient - he digs his own clay and runs his own private railway at his place in the Coromandel.  Here is a link to a great video  from 1970, that captures the essence of that magical time in New Zealand pottery.

In honour of his visit there was a public wood firing over a couple of days at the Otago Polytechnic Art School.  I managed to put some pieces in - a vase and three of my bellarmine jugs that I have been waiting to salt fire.

Bellarmines are decorated stoneware drinking vessels from the 16th Century in Germany that have  a long and curious history - the fierce bearded face on the side may represent a mythical 'wild man' or an unpopular politician at the time - but I have to say his expression only improves with a foam of beer flowing out of the top of his head and over his rounded belly.  Bellarmines were also widely used as 'witch bottles' in the Middle Ages - they have been found buried under houses containing various magical bits and pieces  (black or white).

Here are some of mine.  They are a good tankard size, holding about 500 mls, just slightly smaller than traditional bellarmines. 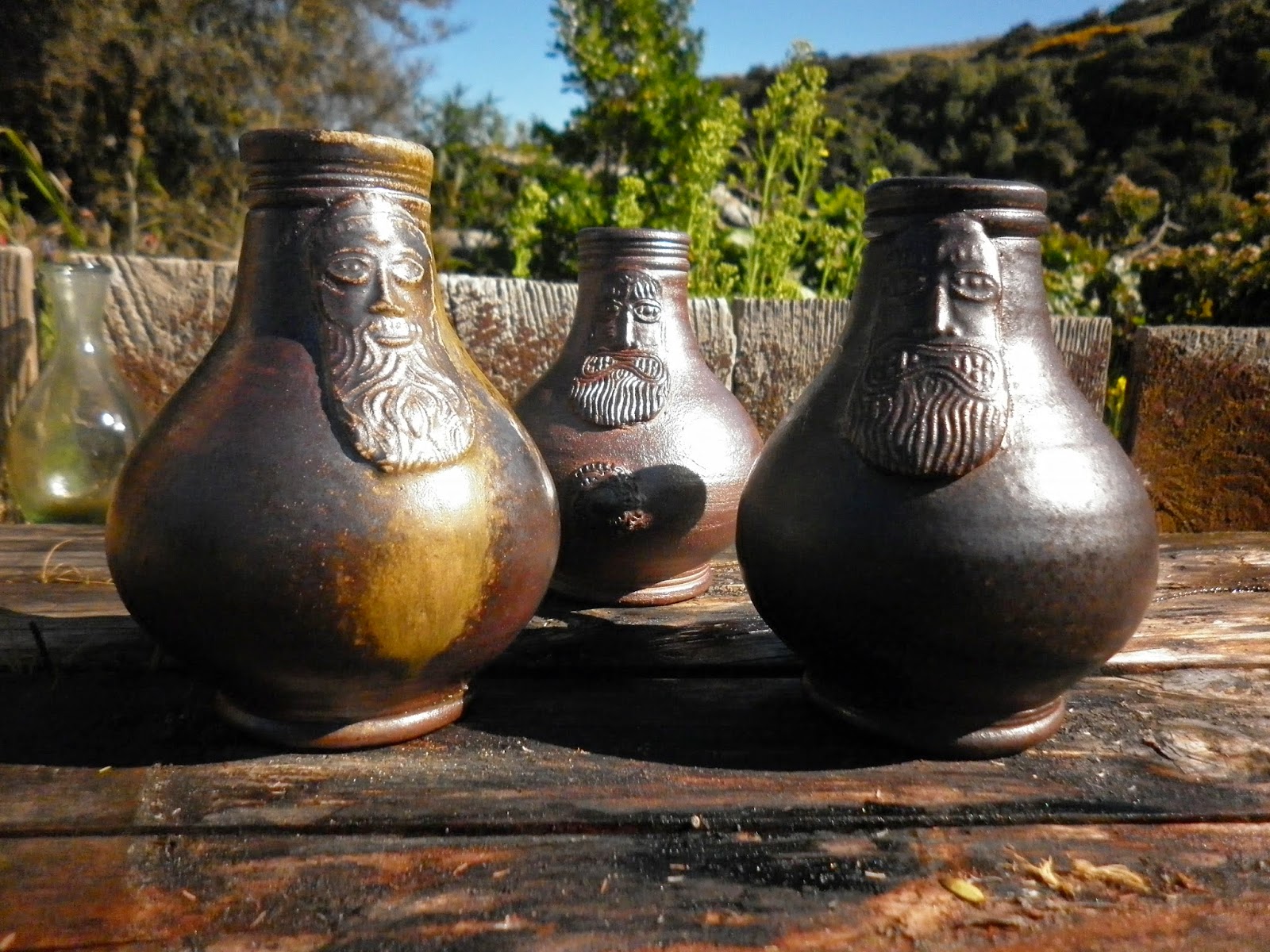 Several Dunedin potters and ceramic arts students put pieces into the firing, which started on Thursday afternoon and carried on for most of Friday, with wood being cut and fed in until it reached Cone 12 around 1 am.  Then it was turned off and cooled down until Sunday midday, when I went along to see the results.

Here's the art school wood kiln from the outside: 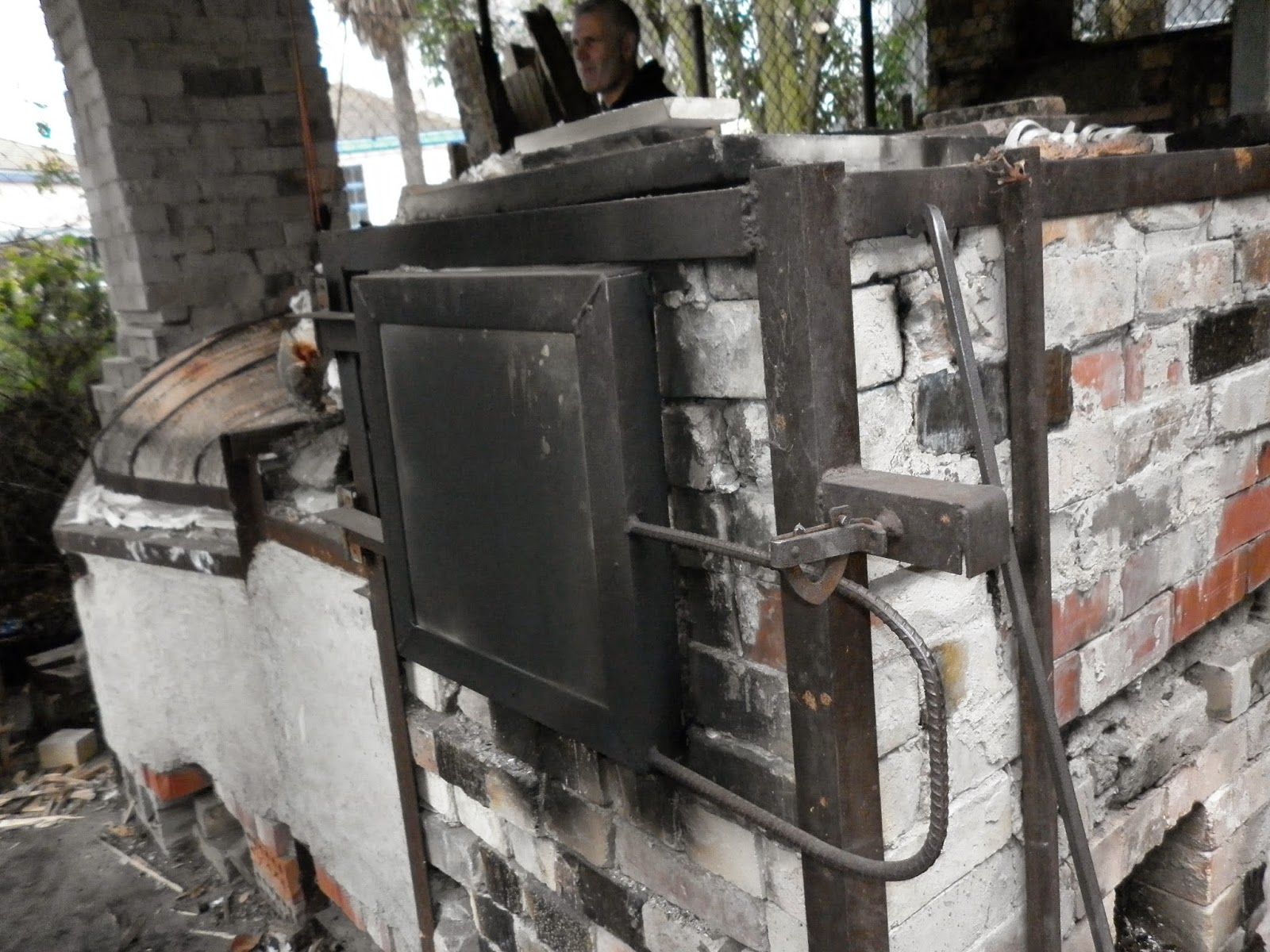 And here's the sight that greeted us when we opened the lid. You never know how it's going to work out, but this was amazing - the transformation from everything being pink to being beautifully ash glazed. It was quite a buzz. 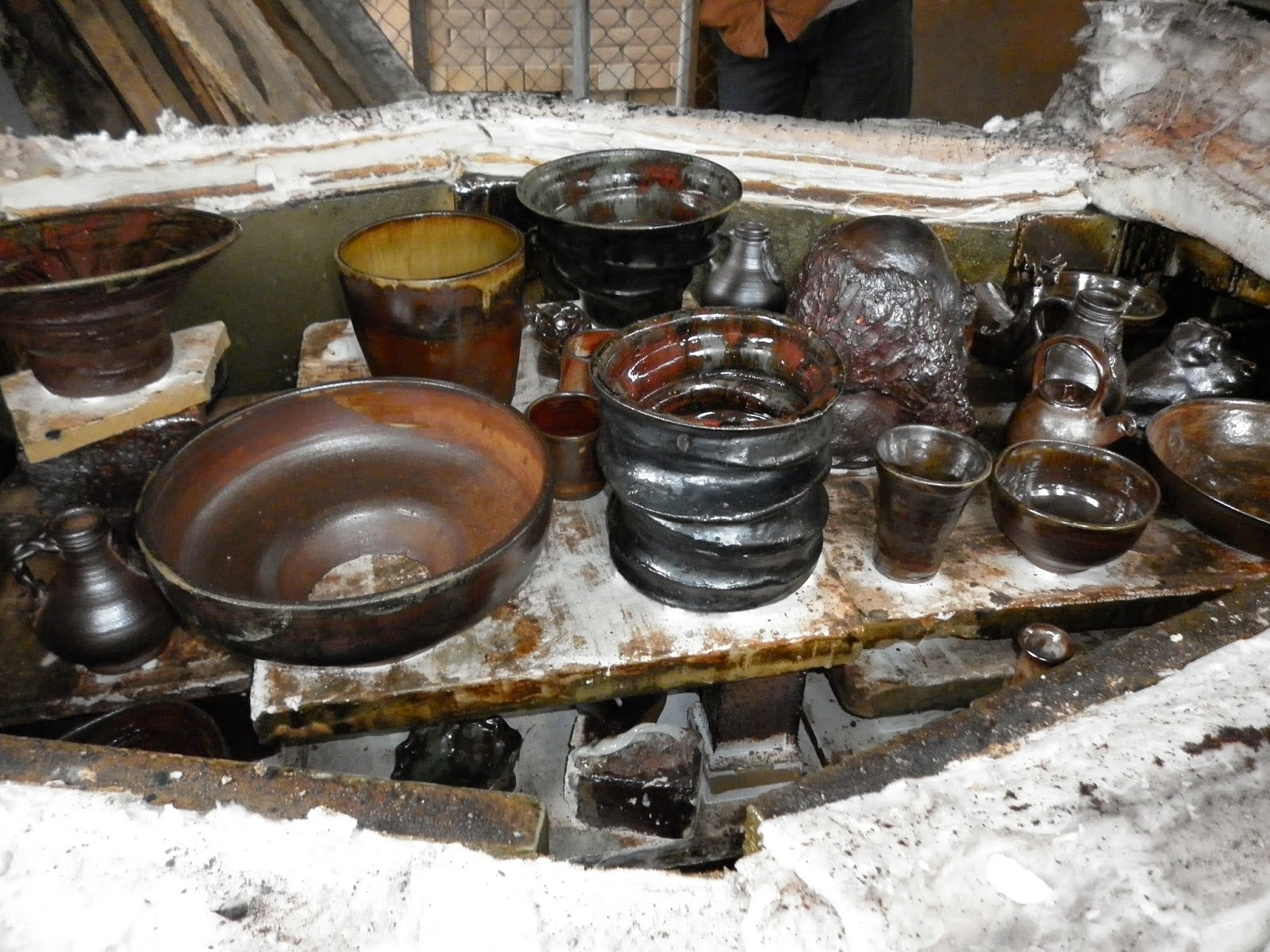 Here they are set out on a table, showing the range of natural effects you can achieve with this kind of slow, organic firing: 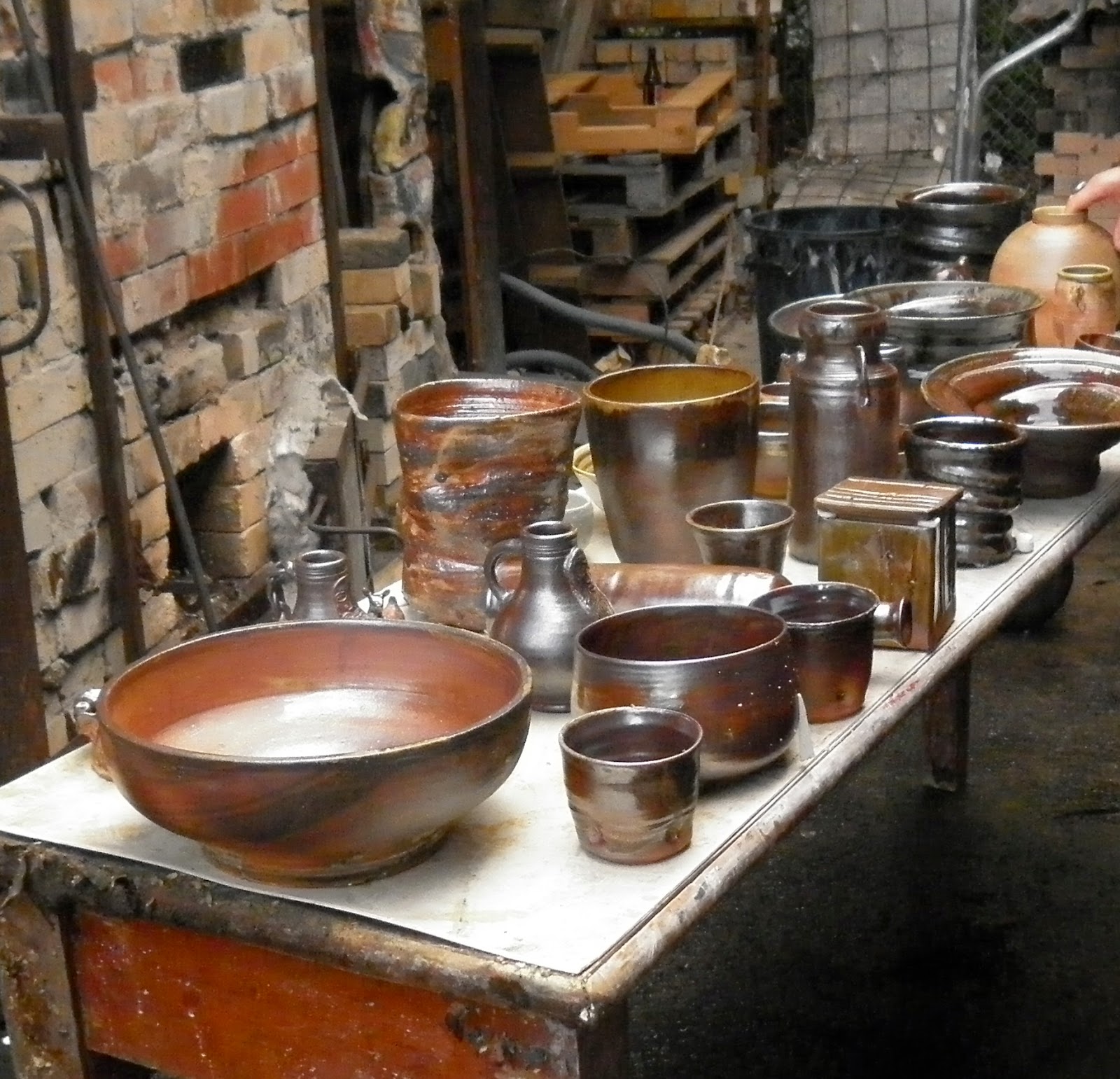 Posted by Danny Holland at 10:52 AM No comments:

This month I have mainly been testing glaze materials and porcelain clay bodies:

Posted by Danny Holland at 12:45 PM No comments:

Recently I was lucky to get my hands on some very old clay and pottery materials, but unfortunately nobody remembers exactly what they are.  They were stored for thirty years underneath a pottery which is now closed. Rumour has it that they originally came from the clay factory at Benhar, and could be materials such as kaolin, ball clay, and feldspar...and then there is some mysterious pink stuff.  This could be a fritt, a glaze...or even a fertilizer, who knows! To anyone who doesn't know it just looks like dirt. Excavating them was a mission, as a few bags had split open over the years spreading clay dust everywhere, and I had to cart them along a muddy goat track above a steep drop to a creek. Some of those bags weren't exactly light either.


To test my clays, I'll add a little bit of water to see how it reacts. If it's a clay, it'll be sticky, plastic, buttery, waxy - and feel like clay - but if it's a feldspar or a silica it'll pack down hard like a rock in the bottom of a test container. Preliminary tests have shown that some of these materials could also be a glaze. And then there's still the mysterious pink stuff...

I am also planning on testing everything in my glaze lab so I have something to compare these results to. A couple of years ago I got some glaze materials that also need tested so I might as well do that while I'm at it. But that will have to wait for the next blog post.

Posted by Danny Holland at 2:18 PM No comments:

Lovely day, about time I updated my blog, gonna keep it short and sweet.

Pros and cons of fuels

Over Easter I fired fibre and brick kilns, with varying degrees of success.

The gas kiln is always easy, being gas, but brick and fuel kilns are a different matter. After about two years of experimenting with different fuels, I have decided to go back to diesel for the following reasons...sure, sump oil from a local garage is a free fuel source, its viscosity is also good, being mixed oils and transmission fluids. All of these burn extremely well and it gives a certain sheen to a glaze like only oil can, but it would have to be one of the most filthiest substances known to man. It's also quite possibly carcinogenic and turns the potter pitch black. After working with how clean gas is, I would prefer it to be like that for the brick kiln.

Which brings me to... vegetable oil mixes; the best one being a 50-50 mix of diesel plus canola oil from the local fish and chip shop. This also burns good and gives nice results,  but it has to be mixed and for best results put through a filter so as not to clog up (even slightly) the taps and burners. This can be time consuming, unless one enjoys this sort of thing.

The final straw for me was when it came to what was taking place in the fuel tank. I thought viscosity was the problem, then I saw the crap that came out of the tank! I had put clean canola oil in and it grew some sort of green algae slimy shite and a lot of it - that would slow down the flow somewhat. The sump oil had also left behind metallic dregs like small flakes and even little twists of metal, that looked like little snails, all packing down into a solid mass at the bottom of the tank. Sometimes being frugal doesn't always pay off,  but you have to try these things to see what does.

Diesel simplified things so much, no clogging of taps and burners, no oil slick all over my face, arms and legs, and the results were awesome. It's as close to using gas as I can get without using gas. It's worth the extra outlay to be problem-free.
Posted by Danny Holland at 12:25 PM 3 comments:

A spot of maintenance

It's easier to repair a pyrometer in the daylight than in the middle of the night in the dark and pouring rain...


Posted by Danny Holland at 5:35 PM No comments:

It's been a busy year so far. I tried but failed at using canola oil as a fuel for the brick salt-glazing kiln - viscosity issues - so not enough flow, but since it is a medium-sized kiln I had a go anyway.  It basically blew itself out, but no great loss that some work was damaged, as I'm still interested in the test tiles that are still in there. I have already mixed up a test fuel to fire up this weekend if the weather holds out.

I enjoyed firing up some large terracotta pots in the gas kiln. It's so good not having to mix some (sometimes filthy) fuels together, soooo clean...so easy, and also cheap as [efficient]

Posted by Danny Holland at 3:55 PM No comments:

Danny Holland
I am a potter living near Brighton, just south of Dunedin, New Zealand, with my partner Katherine and our two cats. We are situated near the beach, in an area of stunning natural beauty. I work with raku, stoneware and salt glazes.